How Schools Are Bridging the Coding Gender Gap 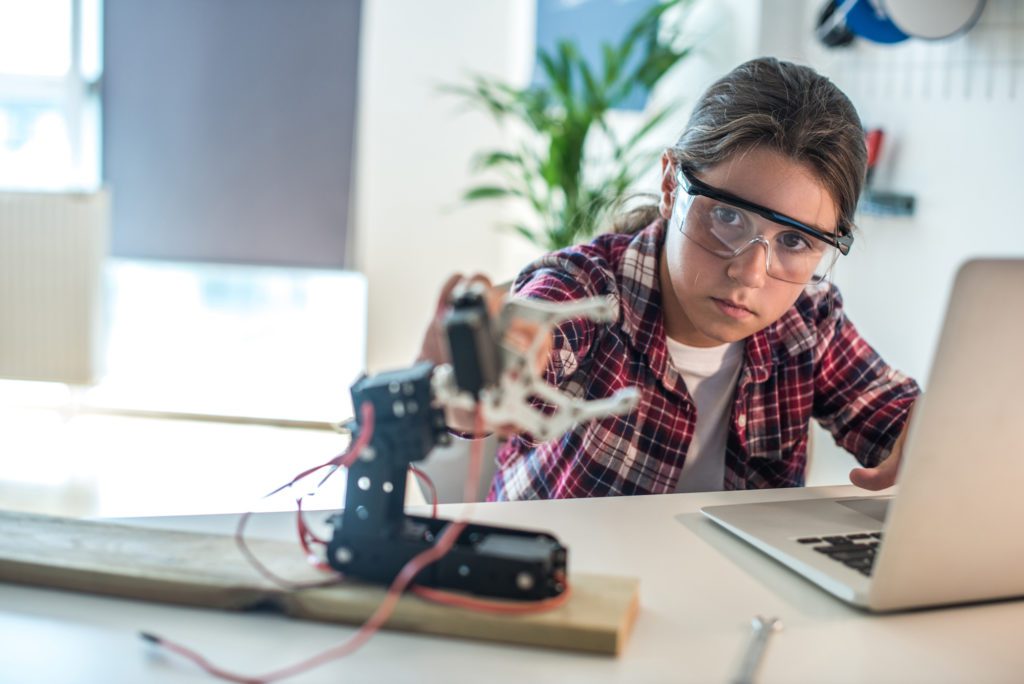 Computer science classes have long been the domain of boys. While girls and boys are now equally represented in advanced science and math classes, girls still are not flocking to classes like Programming in JAVA or Mobile App Development. With the growing need for computer scientists in the workforce, school leaders are trying to convince girls that these classes aren’t just boys’ clubs.

“Things don’t happen by chance,” said Gilmore. “You have to ask, ‘Do all kids have opportunities?’ As a superintendent, my job is to remove barriers for kids.”

Girls only made up about one-fifth of all AP students in computer science in 2013, according to the National Girls Collaborative Project, even though girls are equally likely to take the science and math AP exam. This gender gap continues into college. In 2015, only 18 percent of all computer science college degrees in the country went to women.

This gap puts girls at a distinct workforce disadvantage in an industry on track to explode with opportunities. According to ComputerScience.org, the Bureau of Labor Statistics projects growth of 15-20 percent in computer science jobs between 2012 and 2022. By 2020, there will be only 400,000 students. With those real-world opportunities, it is important to open more students — both boys and girls — to the pathways that coding skills could provide.

Why Girls Don’t Feel They Belong in Coding

It is somewhat puzzling that girls are comfortable calculating derivatives in calculus classes or studying harmonic motion in physics, but tend to balk when confronted with rows of computer terminals. A variety of factors are behind the computer science gender gap, according to a 2010 report by the American Association of University Women, including the geeky-guy stereotype, which is reinforced through popular media. Teenage girls think that computer classes are filled with skinny guys with bad social skills, like the characters on the television show “The Big Bang Theory”, and don’t feel comfortable stepping into that environment.

Researchers from the University of Washington found that simply redecorating the classroom might bust through that stereotype barrier. Allison Master, Sapna Cheryan, and Andrew N. Meltzoff reported in the Journal of Educational Psychology in 2015 that girls were three times more likely to say that they would sign up for a computer science class in rooms that were decorated with nature posters, lamps, and plants, rather than rooms that contained Star Trek posters and science fiction books.

“When girls felt that they belonged in the environment, they became more interested in taking the course,” according to the article.

Learning from female computer teachers, particularly during the middle school years when interest in computers peaks for many girls, may also hold the key to increasing gender equity, according to research by Accenture and Girls Who Code, a nonprofit organization that runs summer immersion programs for girls across the country. Developing a positive “experience of computing in their junior high years means that girls are 18% more likely to show interest in computing throughout their high school and college years,” according to the Accenture research.

Getting girls in the classroom is a focus for several tech-forward school districts across the country. Dr. Michael Lubelfeld, the superintendent of Deerfield Public Schools in Illinois, and a member of AASA’s Digital Consortium, has acquired a reputation as a technology innovator. And this is a topic he is passionate about. Lubelfeld has successfully increased the number of girls in computer science, garnering a lot of attention for his school district.

He’s found that a combination of community involvement, the presence of female mentors, and support from the school board are critical to changing mindsets. He also believes that immersing both boys and girls in computer science at an early age, in all subjects, is extremely important to overcome the gender gap. His district is even discovering new ways of bringing coding into English classes.

He also pointed to the success of a lunchtime learning experience, “STEM for Girls,” which was run by mothers from the community with careers in computer science and engineering. Over 100 elementary school girls learned how to build robots, performed basic coding, and completed hands-on, creative experiments using electricity and magnetism.

Beyond pulling girls into STEM, the program also served as a catalyst for a community-funded, $1.5 million STEM program in the school district’s libraries and as a factor in the selection of an elementary and middle school named Blue Ribbon Schools in 2016.

Like Lubelfeld, Superintendent Gilmore said that her district worked to bring girls into computer science by starting young and teaching computers across the curriculum.

“We’ve tried to think about it across more than one course,” she said. “We are trying to make it embedded in what we do, rather than being a separate pull out.”

D.C. Everest’s students are exposed to coding experiences even as early as kindergarten, using programs such as Scratch, and in unique learning environments like Maker Spaces, enrichment summer school programs, and during after-school activities like Lego Robotics clubs.

She wants girls to recognize that game design doesn’t just have to be for boys. Her district isn’t putting together clubs or classes that are exclusively for girls, because they want their programs to be open to all students, including students who are English  Language learners in her district.

“Girls play video games, too. Look at the success of Minecraft and Candy Crush Saga. We don’t have to create barriers,” said Gilmore.

Tina Plummer, an assistant superintendent at the Mehlville School District in St. Louis, has worked to improve the computer science gender gap. Plummer and her district partnered with Discovery Education to reach girls when they were young, advocating to form connections with the community, and provide girls with role models.

“Start young, and give them opportunity,” said Plummer.

Mehlville’s schools also reached girls by offering them a girls-only event, “Breakfast with the Experts,” to showcase their various STEM courses and to introduce them to women in the community with careers in engineering, neurobiology, and computer programming.

There are signs of progress. More girls took the AP computer science exam in 2016 than ever before. In 2015, 22 percent of all test takers were girls; in 2016, 23 percent were girls. The College Board also reported that eight states had fewer than ten girls who took the test.

Clearly, more work is needed to get girls coding. Innovations from tech-forward districts like Deerfield, D.C. Everest, and Mehlville can help guide other school districts in their efforts to shift stereotypes.