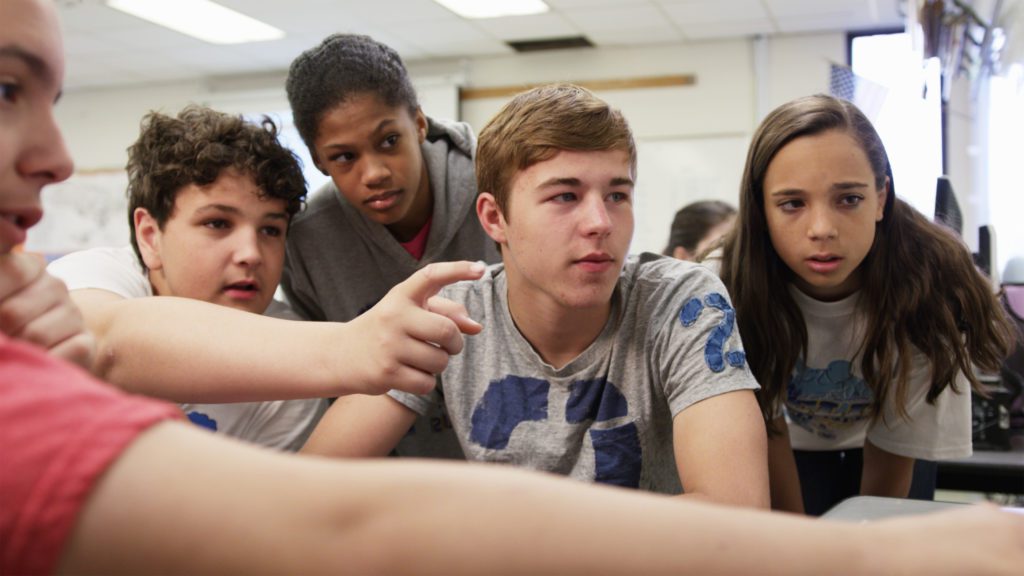 Lately it seems as if every major issue in the country is dividing citizens. From the recent presidential election to debates about fake news, immigration, and health care, citizens are split on their positions. While having a divide isn’t unusual, the gulf between those who are pro and con seems wider than ever before.

This is not just a feeling. A Gallup poll from late 2016 proved it: Nearly 80 percent of Americans perceived the country as divided, topping the previous high of 69 percent in 2012. It seems the only thing Americans can agree on is that we don’t agree.

For middle school teachers hoping to introduce sensitive issues to students, this divisiveness can be daunting. And yet, the exercise has never been more important.

“We need to show kids how to talk about controversial things the right way,” says Larry Lhulier, the supervisor of curriculum, instruction, and technology at New Jersey’s Wildwood Crest Memorial School. Teaching students the skills to debate sensitive issues while still respecting others’ opinions is the best way to counteract the current corrosive debate, he adds.

“What we’re trying to do is prepare young people to participate in democracies,” says Diana Hess, the dean of the University of Wisconsin–Madison’s School of Education.

Hess visited middle school classrooms and studied their debates to research her 2009 book, Controversy in the Classroom: The Democratic Power of Discussion.

The benefit of having these discussions in middle school is that many children haven’t formed a solid opinion about most subjects, she adds. “I like teaching in classes where there’s a range of views and where people were not set [in their opinions]. It’s the puzzle of trying to figure something out.”

Rich Young says a teacher’s first move should be to communicate to parents, students, and the school’s administration any controversial materials chosen for the classroom, such as a movie or book. Explain why the resource is needed, how it will be used, and include class protocols for discussing current events. Young, currently the project director for Teaching American History at the Education Cooperative, was previously the social studies curriculum coordinator in Brookline, Mass.

“You can explore any topic, and if done right, you shouldn’t have any issues,” adds Lhulier. He and others advise teachers to keep their personal opinions out of each debate, but be ready to step in and play devil’s advocate if an entire classroom slants in one direction.

“I have strong views,” Lhulier adds. “I reserve them for home with my wife. The kids didn’t know where I stood on any of the issues we discussed.”

Young points out that classroom debates about the Second Amendment took on different tones when he taught in southern Indiana, where a majority of boys were active hunters, and when he was in Massachusetts, where most students were anti-gun. In both cases he would bring up counter arguments to make sure students had thought through all the issues in this complicated topic.

“Teachers who are really good do a good job of bringing in multiple perspectives,” Hess says. Her studies showed that more and more classrooms are breaking down along “red” and “blue” designations depending on where they are based. “We’re more politically polarized, and students are more likely to live in communities that agree with them.”

“My experience is kids are really open,” Lhulier says. “A good teacher gets kids to think about their perspective in a nonjudgmental way.”

In Wildwood, the New Jersey shore community includes wealthy hotel owners and the families of people who work in the hotels, Lhulier says, offering a rich, socioeconomic diversity.

“Kids get excited about seeing something in a different way,” he says, adding that he considers it a success when a student ends up saying, “I get it. I see how that person would react in a certain way.”

Teachers have to be ready to rein in conversations, especially when students start to share personal details that shouldn’t be public, he says. “Kids are thinking out loud; they don’t have the filters that adults have.”

At the Edward M. Kennedy Institute for the United States Senate, simulations avoid the problems Lhulier mentions. The Boston institute, which includes a near-exact replica of the Senate floor, tasks students with arguing over bills that have been passed in the U.S. Senate—but with a twist. The institute assigns students to portray various senators. So as students dig into the immigration bill, they may represent a conservative senator from a border state or a liberal senator from the northeast. Since the institute opened in 2015, more than 30,000 students from middle school to college have come through its doors.

“It sets students back from their gut reactions and sets the ground rules,” says Kennedy Institute president Jean MacCormack. The simulations include giving students expert testimony to help inform them to reach a consensus. For instance, in the case of the immigration bill, students are told about H-1B visas that allow workers with special skills to enter the country to work for U.S. companies.

“Coming to a compromise is not an easy thing,” she says. “They have to choose between their own opinions, their party’s opinions, and constituent opinions.” Students who don’t agree with their assigned role frequently ask what would happen if they bucked their party or constituents, MacCormack says. “You may not get reelected.”

While sitting in a U.S. Senate replica adds to the drama of debate, MacCormack says the institute has taken its debates on the road, bringing the simulations to Mississippi and Martha’s Vineyard. While Senator Kennedy was unabashedly Democratic, the institute works with staffers from both Republican and Democratic offices to make sure the simulations are nonpartisan.

“Students can learn a lot from simulations,” Hess adds. But she cautions that teachers should be sensitive to assignments when creating conversations. Giving an undocumented student the role of an anti-immigration senator is a bad idea, she says.

MacCormack says the debate, which frequently starts before students come to the institute, typically lasts for days after they return to school. And that, to her, is the entire point. “Democracy isn’t a spectator sport. You have to get involved.”