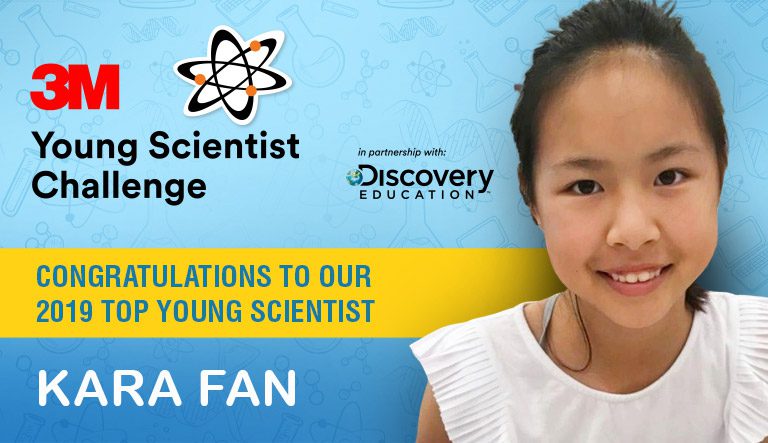 Using the biosynthesis method—a multi-step, enzyme-catalyzed process where substrates are converted into more complex products in living organisms—Kara created a nano-silver (AgNP) solution using lemon leaf and silver nitrate to effectively kill and prevent the growth of bacteria. Her solution was tested using the Kirby-Bauer Method against Staphylococcus epidermidis, E. coli K12 and Bacillus subtilis on a Petri plate to measure the zone of inhibition (the circular area around the spot of the antibiotic use in which bacteria colonies do not grow). Finally, Kara mixed the nano-silver solution with a water-soluble polymer (PVP) to create the liquid bandage.

Kara formulated a nano-silver liquid bandage to replace the use of more commonly used over-the-counter antibiotics ointments and first aid treatments. With her invention, Kara hopes to reduce the number of incidents related to drug-resistant infections.

Kara, a ninth-grader at Westview High School, Poway Unified School District, competed against nine other finalists during a live competition at the 3M Innovation Center in St. Paul, Minn. October 28-29. As the winner of this year’s 3M Young Scientist Challenge, Kara was awarded the title of “America’s Top Young Scientist” as well a $25,000 cash prize and a surprise destination trip.

“Our communities want science to solve the world’s toughest challenges; we hear this in our research on the State of Science. This year’s finalists have truly inspired us with their ingenious efforts to think innovatively and solve real-world problems,” said Denise Rutherford, senior vice president, corporate affairs at 3M. “As a company that remains deeply committed to STEM education and advancement, we wish this next generation of science leaders the best on their continued journey. Congratulations to this year’s winner, Kara Fan, and all our Young Scientist Challenge finalists.”

As part of the program, challenge finalists had the unique opportunity to work one on one with a 3M scientist to transform their ideas from concept to physical prototype as part of the competition’s mentorship program. Kara was paired with Sara Frisco, a 3M advanced product development engineer in the commercial solutions division.

At the final event, finalists presented their inventions to a panel of scientists and leaders from 3M and Discovery Education. In addition to presenting their prototypes, finalists were also paired up to compete in two mini-challenges in which they used 3M technologies and materials to solve, and were evaluated on skills such as collaboration, critical thinking, creativity, communication and problem-solving.

This year’s Young Scientist Challenge finalists received a variety of prizes from 3M and Discovery Education. The second, third and fourth place winners each received a $1,000 prize and one of a kind destination trip. These extraordinary students are:

In second place, Caroline Crouchley, an eighth-grader at Garden City Middle School from Garden City, New York, developed a sustainable method of public transportation that eliminates the need for a diesel engine or electric motor in trains.

The fifth through tenth place winners each received a $1,000 prize and a $500 excitations gift card. These finalists, in alphabetical order by last name, are:

“Discovery Education is so proud to partner with 3M on the Young Scientist Challenge and the Young Scientist Lab program,” said Lori McFarling, president of corporate partnerships, Discovery Education.  “We are all inspired by the finalists’ passion for solving real-world problems and making the world a better place through their curiosity, innovation and commitment.”

For the first time in competition history, the 3M Young Scientist Challenge named a recipient of the inaugural Improving Lives Award. This year’s winner is Reshma Kosaraju, an eighth-grader from San Jose, Calif., who was selected through an online public voting period from October 14-25, 2019. Reshma was recognized for her innovative solution to prevent and predict instances of forest fires using machine learning and neural networks. As part of this recognition, Reshma will receive a one of a kind destination trip.

The 3M Young Scientist Challenge has awarded hundreds of thousands of dollars in student prizes, paired students with world-renowned scientists, and the 3M Young Scientist Lab program in partnership with Discovery Education has delivered much-needed science resources to millions of students, teachers, and families across the country. The challenge targets students during the years when research shows that their interest in science begins to wane, and instead encourages them to find creative ways to explore solving real-world problems using the scientific method. Winners have gone on to be featured in Forbes magazine’s annual “30 Under 30” list, speak in front of members of Congress and attendees at the United Nations, meet the President of the United States and demonstrate inventions on national television programs such as ABC World News Tonight, Fox & Friends, and The Ellen DeGeneres Show.

About 3M:
At 3M, we apply science in collaborative ways to improve lives daily. With $33 billion in sales, our 93,000 employees connect with customers all around the world. Learn more about 3M’s creative solutions to the world’s problems at www.3M.com or on Twitter @3M or @3MNews.

Discovery Education is the global leader in standards-aligned digital curriculum resources, engaging content, and professional learning for K-12 classrooms. Through its award-winning digital textbooks, multimedia resources, and the largest professional learning network of its kind, Discovery Education is transforming teaching and learning, creating immersive STEM experiences, and improving academic achievement around the globe. Discovery Education’s services are available in approximately half of U.S. classrooms and primary schools in the U.K. and reach over 5 million educators and 51 million students in more than 90 countries. Inspired by the global media company Discovery, Inc., Discovery Education partners with districts, states, and like-minded organizations to empower teachers with customized solutions that support the success of all learners. Explore the future of education at DiscoveryEducation.com.