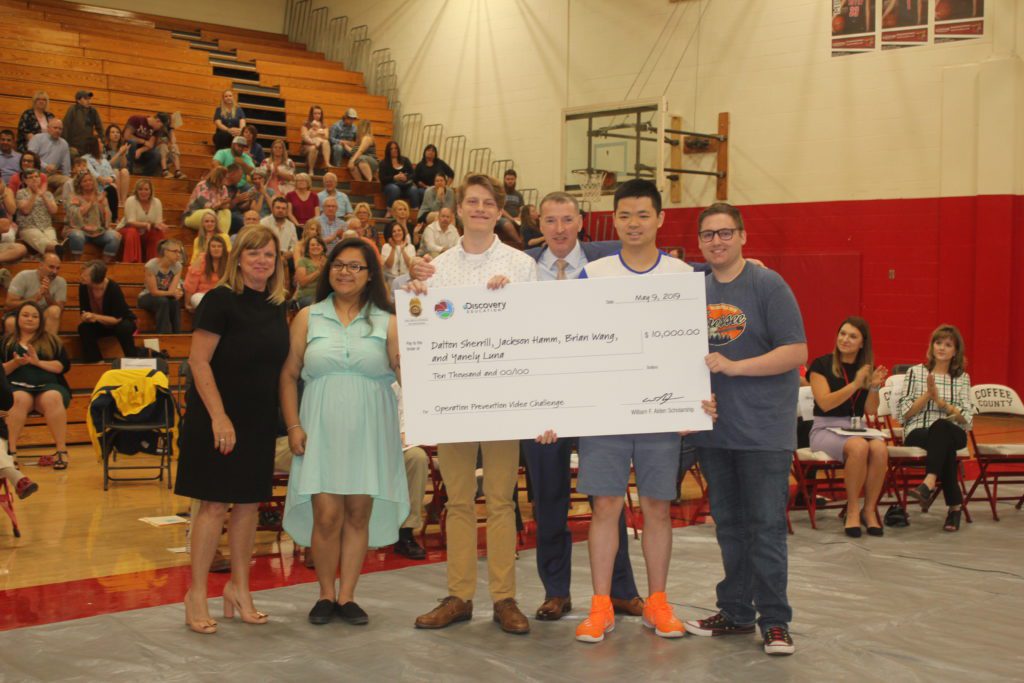 The challenge invited teens across the nation to submit 30-60 second video public service announcements that capture their unique voice in order to communicate the opioid epidemic as a national crisis. In What Could’ve Been, a teenager’s opioid addiction shortens his life, halting the joys of growing into his adulthood. The character captures the essence of the challenge and encourages teens to research the opioid epidemic to identify its widespread impact on the country.

“Congratulations to the winners from Coffee County Central High School on creating a gripping video message that illustrates the gravity of opioid addiction and how it can devastate lives,” said Sean Fearns, chief of community outreach, DEA. “The role peer-to-peer influence has in preventing opioid misuse before it starts cannot be overstated. We are truly encouraged by the leadership we’ve seen exhibited by our nation’s youth.”

The third annual video challenge is a part of Operation Prevention, a joint nationwide education initiative that aims to educate students about the science behind addiction, and its impact on the brain and body. Available at no-cost, the program’s resources help promote lifesaving discussions at home and in the classroom. The winning video was chosen by a panel of educators and judges from Discovery Education, the DEA, and the DEA Educational Foundation.

“Not only did these students make an impactful and creative PSA, they took time to include community members in it. That choice likely contributed to them winning the ‘People’s Choice Award’; everyone loved seeing the video spread throughout the community,” said Megan Eaves, assistant principal at Coffee Country Central High School. “I think I can speak for all of the administrators and teachers at CCCHS when I say that we are very proud of the work these students put into their video, and we are excited about their win.”

Coffee Country Central High School Career and Technical Education Director Richard Skipper continued, “I say this a lot, every one of our kids will become something great, we just don’t know what! Audio visual production classes at CCCHS provide wonderful opportunities for students to thrive and our newest ‘Operation Prevention Video Challenge’ winners are a powerful example of what is possible.”

First, second, and third place prizes are provided courtesy of the DEA Educational Foundation and the People’s Choice Award prize is made possible by support from the DEA. Winning videos can be viewed at operationprevention.com, and will be featured across DE and DEA digital, including social media platforms. Program resources are accessible for free online and also through Discovery Education Streaming Plus.

“Discovery Education is proud to support the DEA in a critical effort to combat the epidemic of prescription opioid misuse, which is impacting communities nationwide,” said Lori McFarling, senior vice president and chief marketing officer, Discovery Education. “We’re inspired by the number of young people across the country who are taking action to save lives by participating in the ‘Operation Prevention Video Challenge’. Congratulations to this year’s winners, finalists and participations.”

About the Drug Enforcement Administration:
The mission of the Drug Enforcement Administration (DEA) is to enforce the controlled substances laws and regulations of the United States and bring to the criminal and civil justice system of the United States, or any other competent jurisdiction, those organizations and principal members of organizations, involved in the growing, manufacture or distribution of controlled substances appearing in or destined for illicit traffic in the United States; and to recommend and support non-enforcement programs aimed at reducing the availability of illicit controlled substances on the domestic and international markets. The DEA encourages parents, along with their children, to educate themselves about the dangers of legal and illegal drugs by visiting DEA’s interactive websites at justthinktwice.gov, getsmartaboutdrugs.gov and dea.gov.