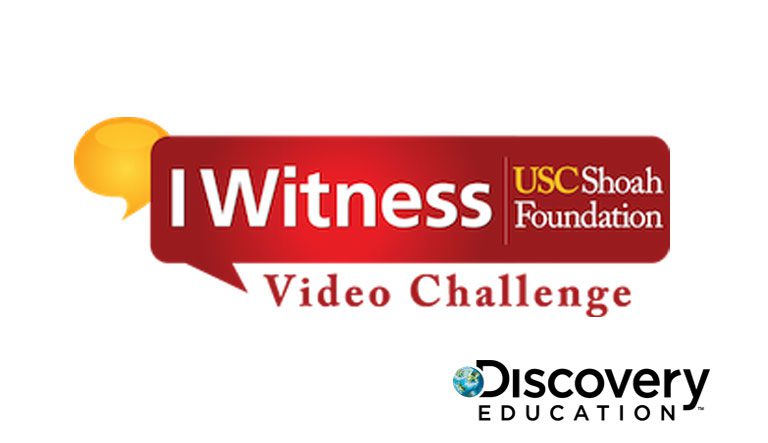 Silver Spring, Md. (Monday, June 18, 2018) – In an effort to spark a social movement against hatred in all forms, USC Shoah Foundation – The Institute for Visual History and Education – and Discovery Education, the leading provider of digital content and professional development for K-12 classrooms, today announced the winners of the 2018 IWitness Video Challenge. A group of Chicago, Ill. students have inspired their classmates and community to embrace each other’s unique differences, specifically as it relates to the challenges of American immigrant communities. This year’s first-place winners of the short video contest, which invited students to be inspired by testimony of survivors of genocides and mass atrocities to make a positive contribution to their communities, are FanXuan Peng, Israel Gomez, Jennifer Tegegne, and Yannie Wang of Northside College Preparatory High School (Chicago Public Schools). The team will be generously donating their $5,000 grand prize to Northside’s “DREAMers & Allies Club” to be put towards educational initiatives and programming related to immigration.

Initiated by USC Shoah Foundation in 2013 and designed to provide actionable ways to promote empathy and empowerment while also challenging bias and intolerance, the 2018 IWitness Video Challenge encouraged students to make a change in communities nationwide. To participate in the contest, students first listened to the testimonies of survivors and witnesses of genocide. They then completed a research-based and standards-aligned activity, which inspired the development of community action projects to counter hate. To enter the Challenge, students were required to document their experiences in video essays for submission. This year’s winning video essay starts with the testimonies of two Holocaust survivors, Herman Cohn and Liesl Loeb, who immigrated to the United States as children.

“Following our reflection on the IWitness testimonies, we were propelled to improve our school community by helping immigrants avoid experiencing fear and discrimination,” said FanXuan Peng, Northside College Prep student and ‘IWitness Video Challenge’ winning team member. “The perception of America shouldn’t be of a divided country between natives and immigrants, but rather a melting pot where different ethnicities have endured some form of discrimination yet have thrived.”

After viewing the testimonies, FanXuan, Israel, Jennifer, and Yannie were inspired to create a project that brings awareness of the ongoing struggle immigrant students and their families face and tackles the important topic of discrimination in modern society.

The winning “Stronger Than Hate” project showcases an “immigration timeline” that connects historical experiences of bias, intolerance, and marginalization from one community to another, with the overall goal of demonstrating how discrimination is a collective struggle rather than a personal one. The project ultimately underscores how impacted communities have managed to lead fulfilling and successful lives after migrating to the United States.

“The students from Northside focused on the timely subjects of immigration and discrimination with great sensitivity,” said USC Shoah Foundation Director of Education Claudia Ramirez Wiedeman. “I was particularly impressed with how inclusive their work was by demonstrating that any group can be marginalized.”

This year’s contest – the fifth annual – offers prizes for scholarships and additional money for educators and schools. In all, $10,000 in prizes are being awarded courtesy of Ford Motor Co., which sponsors the event as part of its commitment to innovative educational outreach. The contest was open to middle and high school students across the U.S. and in Canada, with the exception of Quebec.

Also helping to make this year’s challenge successful was the Institute’s partner Discovery Education, which administered the challenge and helped maximize reach, and impact through its deep partnerships with school systems, administrators and educators worldwide.

In addition to splitting a $5,000 college scholarship, the winning students have secured a $2,500 grant for their school to be used to improve their community. Their teacher, Charles Milbert, will receive a $1,000 grant to help cultivate tolerance and empathy among the student body.

A $1,000 scholarship went to second-place winners Anthony McArdle, Kristian Morris, Shawnee Cranfill, and Trenton Grace of Northern High School in Dillburg, Pa (Northern York County School District). Their “Northern High School Pen Pal Project” aided students in leveraging the power of the pen to celebrate each other’s similarities instead of one another’s differences. After uniting project participants, students felt more connected and enjoyed getting to know students they otherwise may not have met. A $500 scholarship also went to Bernadette Carney, Emma Foursha, Kiera Songhurst, and Rebecca Bornstein from Our Lady of Good Counsel School in Moorestown, N.J. for their project “Acceptance,” which encouraged students to anonymously reveal their struggles and work together to publicly accept and celebrate their differences.

“Discovery Education’s collaboration with the USC Shoah Foundation connects students with powerful ways to promote equality and challenge bias through immersive, peer-to-peer educational experiences that motivate them to build a better future, said Lori McFarling, chief marketing officer and senior vice president, Discovery Education. “We congratulate this year’s IWitness Video Challenge winners for underscoring that discrimination and intolerance is not a personal struggle, but rather a collective one, and we applaud their thoughtful approach to discouraging bigotry in all its forms.”

The contest is based on one the more than 200 activities found in IWitness, USC Shoah Foundation’s free educational website. The website brings the human stories from the Institute’s Visual History Archive – the world’s largest repository of testimony from survivors and witnesses to the Holocaust and other genocides – to teachers and their students via engaging multimedia learning activities.

Last year’s winners inspired their fellow classmates to celebrate their diverse identities with a project called, “Who Are You? Embracing Identity in Our Community.”

Previous winners wrote kind notes to every student in their school, while the first winner documented her determination to stand up for undocumented workers after being moved by testimonies of Holocaust survivors who described their struggles being undocumented immigrants themselves.

“I have observed growth, development and an enhanced understanding of the importance of human rights and advocacy after encouraging my students to participate in the IWitness Video Challenge,” said Karen Wells from Midland High School in Pleasant Plains, Arkansas. “For many students, participating in the experience is transformative and has proven to be a catalyst for stronger relationships within our school community.”

About USC Shoah Foundation
USC Shoah Foundation — The Institute for Visual History and Education is dedicated to making audio- visual interviews with survivors and other witnesses of the Holocaust and other genocides, a compelling voice for education and action. The Institute’s current collection of 55,000 eyewitness testimonies contained within its Visual History Archive® preserves history as told by the people who lived it, and lived through it. Housed at the University of Southern California, within the Dana and David Dornsife College of Letters, Arts and Sciences, the Institute works with partners around the world to advance scholarship and research, to provide resources and online tools for educators, and to disseminate the testimonies for educational purposes.

About Discovery Education
As the global leader in standards-based digital content for K-12 classrooms worldwide, Discovery Education is transforming teaching and learning with award-winning digital textbooks, multimedia content, professional learning, and the largest professional learning community of its kind. Serving 4.5 million educators and over 50 million students, Discovery Education’s services are available in approximately half of U.S. classrooms, 50 percent of all primary schools in the UK, and more than 50 countries around the globe. Inspired by the global media company Discovery, Inc., Discovery Education partners with districts, states, and like-minded organizations to captivate students, empower teachers, and transform classrooms with customized solutions that increase academic achievement. Explore the future of education at DiscoveryEducation.com.